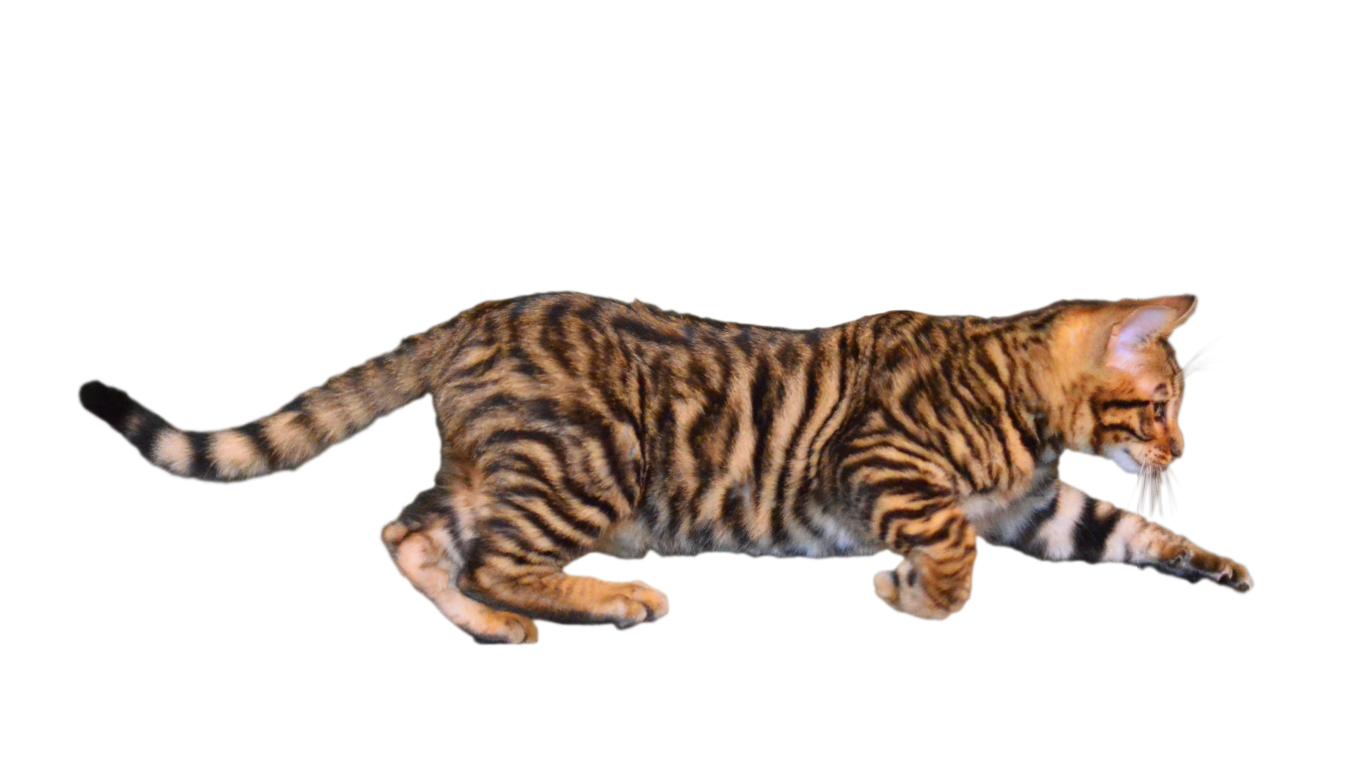 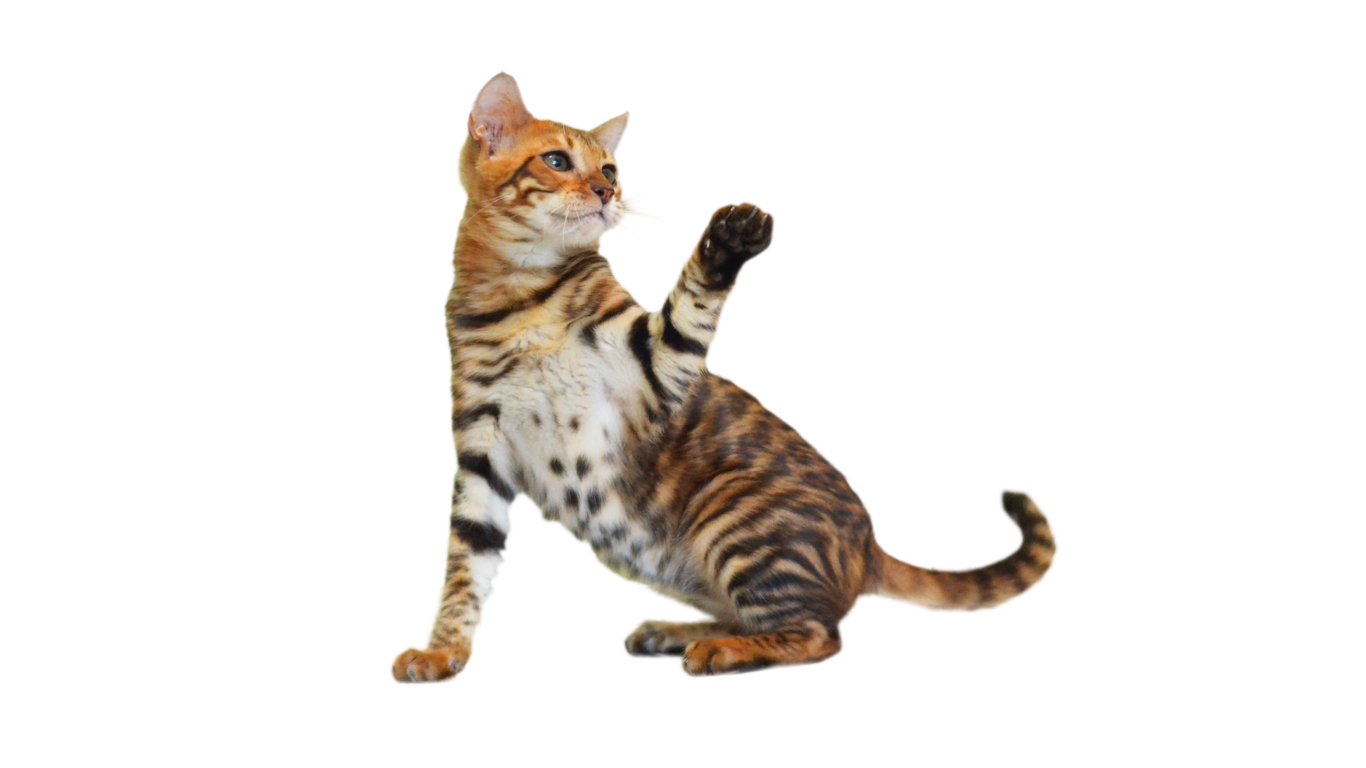 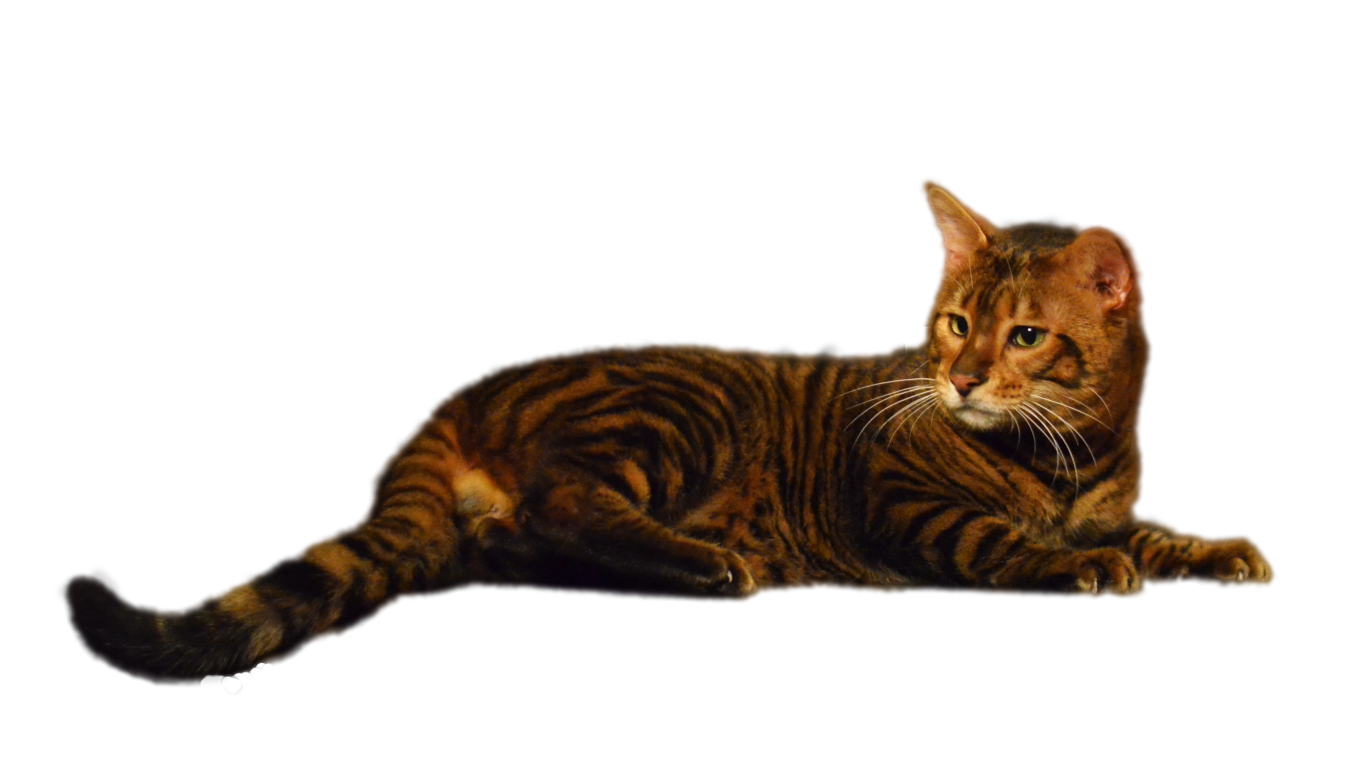 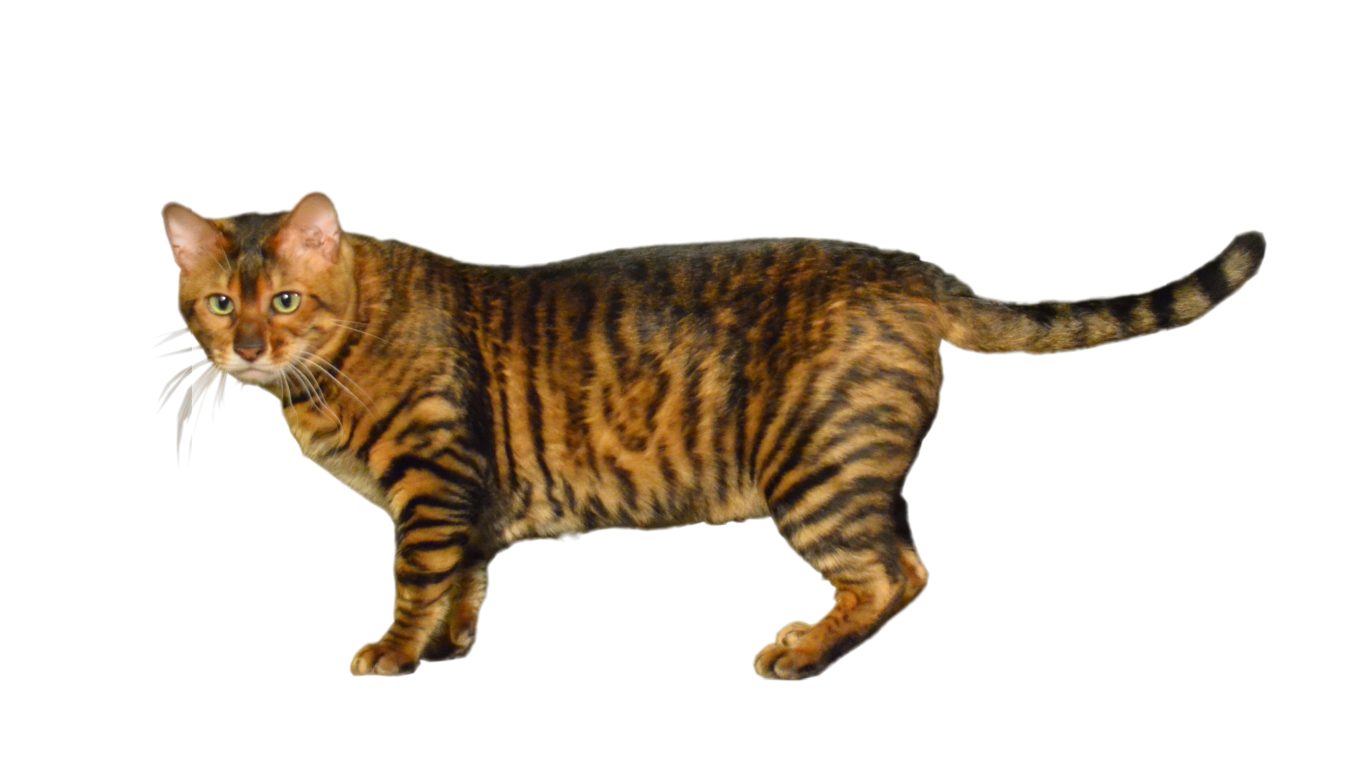 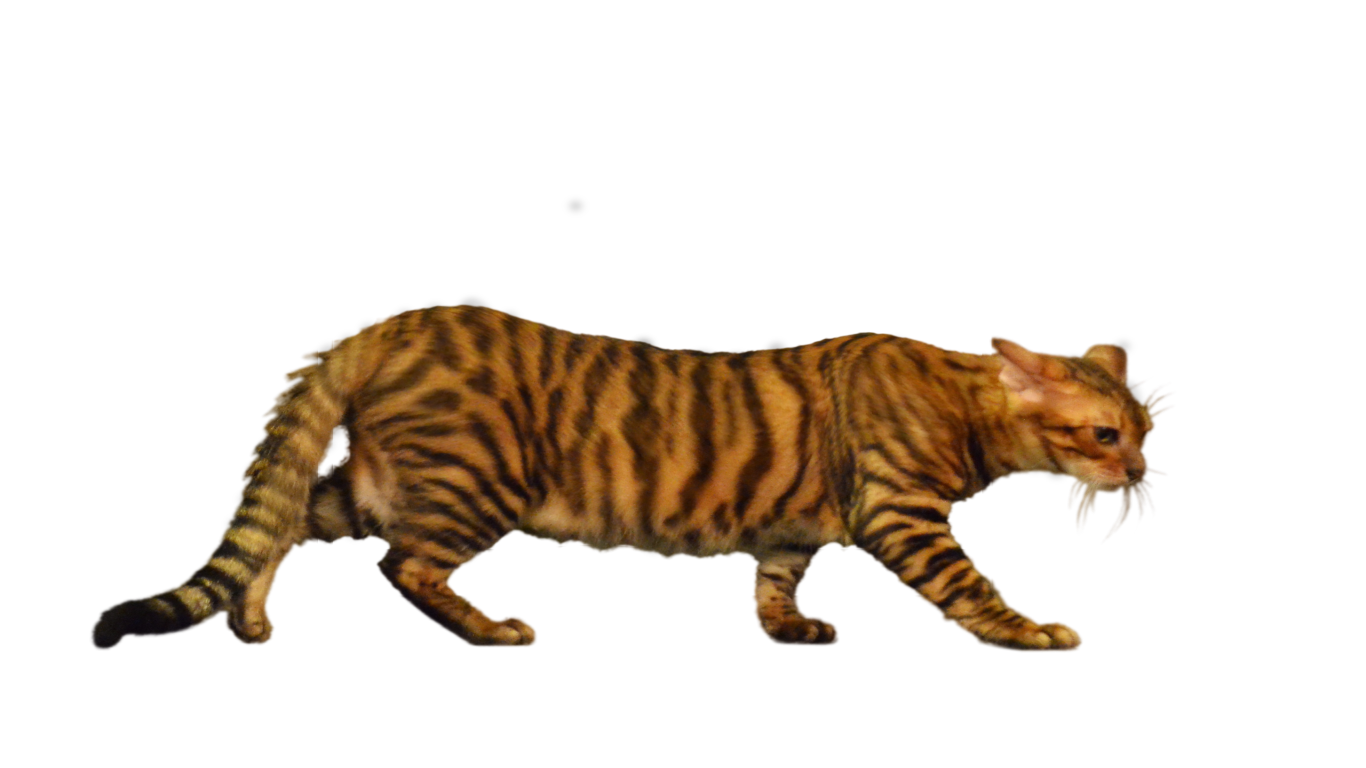 We breed and select our cats according to the TICA Standard.

Throughout history there are indications of a profound human fascination with the large and small wild felines that inhabit the jungles and forest of the world. In 1963, Jean S. Mill crossed the domestic cat with the Asian Leopard Cat, a spotted five to twelve pound shy wild cat species from Asia. This was the first effort to use hybrid offspring to create a breed of domestic cat with the loving nature of a favored fireside tabby and the striking look associated with Leopards, Ocelots and Jaguars. The modern Bengal breed traces to cats bred by Mrs. Mill beginning in the early 1980's. The breed's name is a reference to the scientific name of the Asian Leopard Cat, Prionailurus bengalensis. The hybrid crosses are registered as Foundation (F1, F2 & F3) Bengals that are not eligible for show and only the females are used for breeding.
Accepted as a new breed in TICA in 1986, Bengals gained championship status in 1991. They are now one of the most frequently exhibited breeds in TICA. An enthusiastic group of breeders around the world have successfully fulfilled the goal of creating a docile, civilized house cat that wears the richly patterned coat of the jungle cats and has some of the arresting features that have inspired and aroused humanity for centuries.

While you can train a Bengal to have "good manners", they are an active, inquisitive cat that loves to be up high. If you don't like a cat to leave the floor, a Bengal is probably not the right cat for you. Bengals are busy by nature. They are very affectionate and can be a "lap cat" whenever THEY want to be, but in general their idea of fun is playing, chasing, climbing and investigating. When a Bengal is in full play mode, it's rather like trying to hold on to running water! They'll often save the cuddle time for when they want to sleep. Many Bengals enjoy water and may join you in brushing your teeth or taking a shower. Some Bengals are vocal while others are more quiet and selective about using their voice.
Bengals will also, in general, ALWAYS want to be where you are. After all, that's where the action is! And Bengals are all about "The Action". When given the choice of a static toy, and one that does wild, unpredictable things, Bengals will always choose the "wild" one! For individuals or families who enjoy rambunctious, funny, beautiful and dynamic feline companionship, consider the Bengal.

The Bengal is most noted for its luxurious short, soft coat which may appear in either the spotted or marble pattern. Some Bengal's coats feature something called glitter which imparts an iridescent sheen to each hair. The spotted pattern is most associated with the "leopard look" as the coat features clearly discernible spots and rosettes. The Bengal's spots can be large or small and often include rosettes, like the spots of Jaguars and Leopards, which are two- toned spots. Bengals may also be marbled, which is a derivative of the classic or "bull's eye" pattern found in many breeds of cats but with an especially dramatic appearance in Bengals. The marbled Bengal has a swirling pattern that appears as random swirls or thick diagonal and horizontal lines flowing across the coat of the cat.
The most popular color of the Bengal is the brown/black tabby, a lackluster description for coats that can be anywhere from a cool grey to vibrant shades of golden, bronze, copper or mahogany with spots or marbling ranging from rich browns to intense black. Bengals also come in a range of colors associated with a form of albinism, called "snow" by breeders, that indicates Siamese and Burmese ancestry. In these colors the coat appears ivory, cream or light tan with spots or marbling that may range from light brown to dark chocolate and the eye color is blue to aqua. Silver Bengals have grey to nearly white backgrounds with dark grey to black patterns. Also distinctive about the Bengal's coloring is that they may have nearly white undersides and facial markings that still show the tabby pattern.
Bengals are medium to large cats, from 6-15 pounds, with males generally being larger than females. A healthy Bengal is well muscled and has an appearance that depicts its athleticism. Bengals are balanced cats and none of its physical features should appear exaggerated or especially pronounced.
Bengals are generally confident, curious and devoted companions. They get along well with other pets when properly introduced and enjoy being part of a family. Each Bengal is an individual and those interested should find out as much as they can about this wonderful breed before adding one to their family. 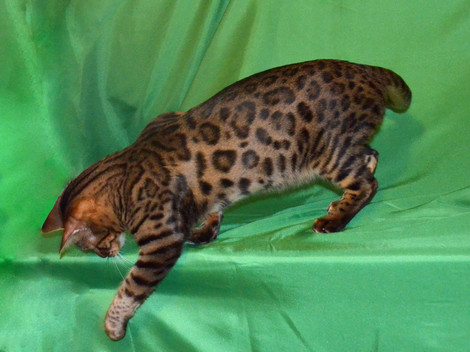 Shape: Broad modified wedge with rounded contours. Longer than it is wide. Slightly small in proportion to body, but not to be taken to extreme. The skull behind the ears makes a gentle curve and flows into the neck. Allowance to be made for jowls in adult males. Overall look of the head should be as distinct from the domestic cat as possible.

Ears: Medium to small, relatively short, with wide base and rounded tops. Set as much on side as top of head, following the contour of the face in the frontal view, and pointing forward in the profile view. Light horizontal furnishings acceptable; but lynx tipping undesirable.

Eyes: Oval, almost round. Large, but not bugged. Set wide apart, back into
face, and on slight bias toward base of ear. Eye color independent of coat color except in the lynx points. The more richness and depth of color the better.

Chin: Strong chin, aligns with tip of nose in profile.

Profile: Curve of the forehead should flow into the bridge of the nose with no break. Bridge of nose extends above the eyes; the line of the bridge extends to the nose tip, making a very slight, to nearly straight, concave curve.

Neck: Long, substantial, muscular; in proportion to the head and body.

Torso: Long and substantial, not oriental or foreign. Medium to large (but not quite as large as the largest domestic breed).

Legs: Medium length, slightly longer in the back than in the front.

Feet: Large, round, with prominent knuckles.

Musculature: Very muscular, especially in the males, one of the most distinguishing features.

Texture: Dense and luxurious, closelying, unusually soft and silky to the touch.

Brown Tabby: All variations of brown are allowed. Markings various shades of brown to black. Light spectacles encircling the eyes and a virtually white ground color on the whisker pads, chin, chest, belly and inner legs is desirable.

Seal Sepia Tabby, Seal Mink Tabby, and Seal Lynx Point Tabby: Pattern can be various shades of brown. There should be very little or no difference between the color of the body (pattern) markings and point color.

GENERAL DESCRIPTION The goal of the Bengal breeding program is to create a domestic cat which has physical features distinctive to the small forest-dwelling wildcats, and with the loving, dependable temperament of the domestic cat. Keeping this goal in mind, judges shall give special merit to those characteristics in the appearance of the Bengal which are distinct from those found in other domestic cat breeds. A Bengal cat is an athletic animal, alert to its surroundings; a friendly, curious, confident cat with strength, agility, balance and grace. It is a medium to large cat which exhibits a very muscular and solid build. Its wide nose with prominent whisker pads and large oval, almost round eyes in a slightly small head enhance the wild appearance and expressive nocturnal look. Its very slight, to nearly straight, concave profile and relatively short ears with wide base and rounded tips add to the Bengal’s distinctive and unique appearance. The short, dense coat has a uniquely soft and silky feel. The coat may be glittered or not glittered, with neither type to be given preference. A thick, low-set, medium-length tail adds balance to the cat.

Temperament must be unchallenging; any sign of definite challenge shall disqualify. The cat may exhibit fear, seek to flee, or generally complain aloud but may not threaten to harm. In accordance with Show Rules, ARTICLE SIXTEEN, the following shall be considered mandatory disqualifications: a cat that bites (216.9), a cat showing evidence of intent to deceive (216.10), adult whole male cats not having two descended testicles (216.11), cats with all or part of the tail missing , except as authorized by a board approved standard (216.12.1), cats with more than five toes on each front foot and four toes on each back foot, unless proved the result of an injury or as authorized by a board approved standard (216.12.2), visible or invisible tail faults if Board approved standard requires disqualification (216.12.4), crossed eyes if Board approved standard requires disqualification (216.12.5), total blindness (216.12.6), markedly smaller size, not in keeping with the breed (216.12.9), and depression of the sternum or unusually small diameter of the rib cage itself (216.12.11.1). See Show Rules, ARTICLE SIXTEEN for more comprehensive rules governing penalties and disqualifications.

Please click the arrow on the right for sub-category